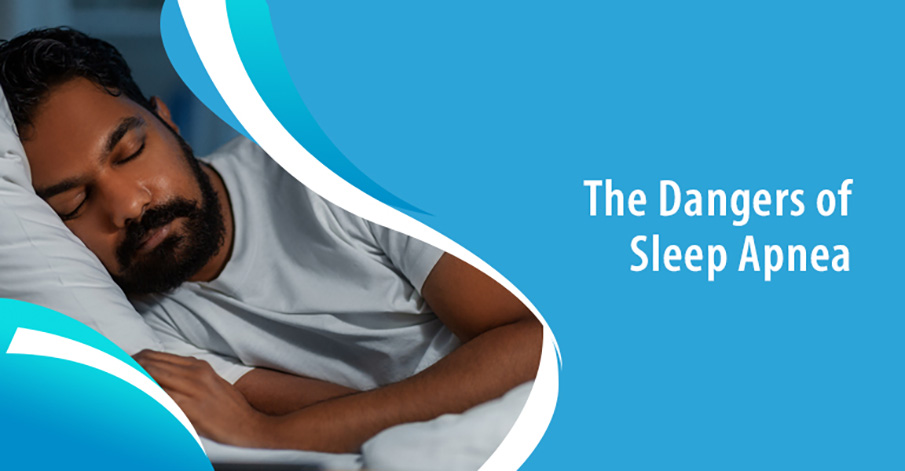 Sleep apnea is one of the most common sleep disorders, affecting over 20 million adults, with an estimated 80% of cases remaining untreated. “Apnea” is a Greek term that means “without air.” Sleep apnea is the involuntary interruption of breathing while a person is sleeping. Most of us aren’t aware that sleep apnea could be the basis of a slew of new health problems. If left untreated for a long time, this could have significant effects.

There are several types of sleep apnea, but obstructive sleep apnea is the most frequent. People also suffer from central sleep apnea(CSA) and complex or mixed sleep apnea.

Sleep apnea symptoms include:
Snoring: The most prevalent sign of apnea is loud, continuous snoring. It’s caused by a partial blockage or obstruction, which prevents air from freely passing through the airways.

Daytime Sleepiness: Excessive daytime sleepiness(EDS) is one of the most common and often neglected signs of sleep apnea. EDS is a condition in which a person has extreme weariness during the day.

Headaches: Vascular headaches are caused by blood vessels expanding as a result of low oxygen levels.

Obesity: Having OSA is almost always linked to a person’s body weight. Obese people are more prone than those who maintain a healthy weight to suffer from sleep apnea.

Mood swings, depression, or irritability: Lack of quality sleep on a regular basis can make you irritable, anxious, and short-tempered, and can even lead to melancholy.

Low oxygen levels in the body might have long-term detrimental health repercussions. This includes the following:

Patients with obstructive sleep apnea share a number of physical and clinical characteristics. Excessive weight, a big neck, and anatomical anomalies that reduce the diameter of the upper airway, such as nasal blockage, a low-hanging soft palate, swollen tonsils, or a tiny jaw with an overbite, are examples of these.

Due to the high occurrence of sleep apnea in cardiac arrhythmias and heart failure (it’s virtually a coin flip whether the patient has it), doctors advise that you seek medical help as soon as possible.

They are as follows:

Visit a doctor or a specialist if you start showing symptoms. At Medica, we have dedicated departments where conditions like sleep apnea are treated through medicine, surgery and other types of modern therapy.