Home » » Get your new-born’s hearing tested before leaving hospital! 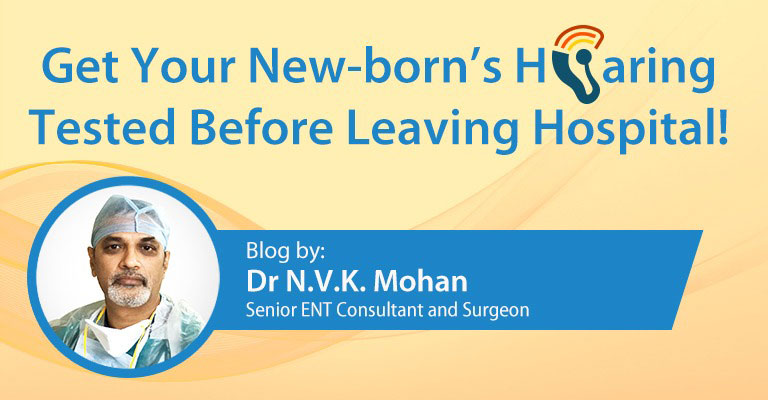 Hearing test for the new-born? You are shocked, right? Yes, you read that right and let me explain why this is important.

When a baby is born, its inner ear (comprising the cochlea i.e. the sensory organ for hearing, and the vestibule i.e. sensory organ for balance) is fully formed and of adult size. But the baby only starts to utter monosyllabic sounds (ba-ba, da-da, ma-ma etc) at the age of around 1. Why is it so?

Now let us try to understand the development of speech and hearing in a baby.

The first 3 years of life, when the baby’s brain is maturing, are very vital in the development of speech and language skills i.e. learning to speak and to express meaningfully. This development has been shown to be best (all else being normal) in an atmosphere that is rich in sounds, sights/visuals and exposure to speech and language of others. Absence of such exposure in early life can lead to significant delays or inability in developing speech.

You may ask why we set off talking of hearing and testing it, but went on to talk about development of speech? The reason is these two aspects are intimately linked. We learn to speak by emulating or copying the sounds that we hear. A child who cannot hear will not be able to speak even if its throat is normal.

Think of it this way – unless there are wires connecting the DVD player to the speakers the home theatre will not play sound.

Think of it this way – there is a far away remote village. You cannot go there unless there is a road (kaccha or pukka) going up to it and the government will not lay the road unless there are people travelling to and from it. This traffic of people is equivalent to the travelling of sound within the baby’s brain and the road laid is the connections within the brain that are necessary for development of hearing and speech capabilities.

Therefore, it is important to make sure, at birth, the new-born can hear normally. The sooner we can identify any problem the better the chance of rectifying it. Also, it has been shown in many studies that if a baby’s hearing problem is detected and corrective steps are taken by the age of 6 months then the baby is more likely to be able to speak as well as any other child of its age.

So how exactly do we test the baby’s hearing at birth?
We do a simple test called Otoacoustic emissions or OAE which takes only about 2 minutes and is totally painless, as simple as taking the baby’s temperature with an infrared thermometer in the ear!

What is the age beyond which the brain loses its ability to form the central connections?
This is around 7 years, if the child has never heard. But for best results the intervention or treatment should be started at least by the age of 5 years, ideally by the age of 6 months.

What do we mean by “an environment that is rich in sounds, sights and speech and language of others”?
This means that the baby should be exposed to different types of sounds like different animals, people, different objects etc. talking to them and singing or reciting to them will expose them to the different qualities of the same voice; they should be able to see the birds, trees everyday objects at home, toys, vegetables etc. all these are stimuli for the development of the child’s hearing and language.

The following are the important milestones in a child’s speech and language development:

By 0 to 3 months the child is expected to achieve the following:

By 4 to 6 months the baby is expected to do the following:

By 7 to 12 months the following is expected:

If you think that your baby is not following the above pattern of development do not hesitate to CONTACT US for an appointment with our ENT doctors.