Home » » Alzheimer’s: Be Wary of These Early Signs 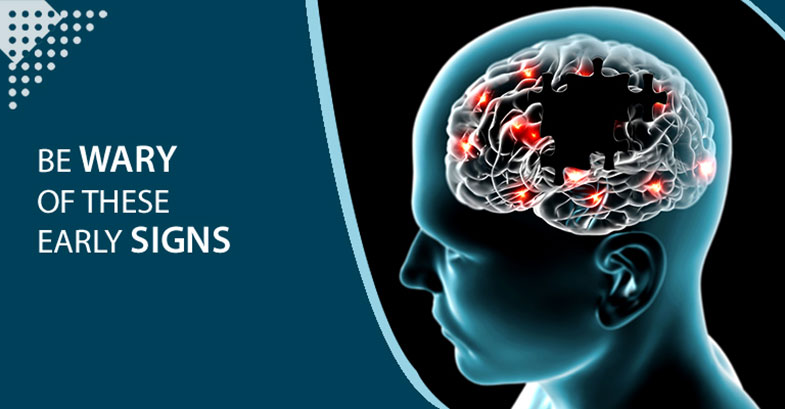 Do you find yourself struggling to perform daily chores that seemed easy earlier? Are you having a tough time planning your monthly grocery list? Don’t take this lightly for these could be the early signs of Alzheimer’s disease!

Alzheimer’s is a progressive neurological disorder, which causes brain cells to degenerate and eventually dies. It is the most common form of dementia (an age-related degenerative condition) that affects an individual’s behaviour, social and cognitive skills, thus disrupting one’s quality of life.

Though the exact cause is not known, the abnormal build-up of proteins in the brain is believed to cause the condition. Over time the brain cells get affected as the chemical messengers (neurons) involved in transmitting messages start decreasing. This causes different parts of the brain to shrink and the person’s ability to think and remember gets affected, progressively making it difficult to perform normal tasks.

The following are the risk factors for Alzheimer’s:

Having any of the above risk factors does not mean you will develop Alzheimer’s disease. It only increases your chances of having it.

How Do I Know It Is Alzheimer’s?

We all keep forgetting things occasionally. But with Alzheimer’s, a person displays certain recurring symptoms and behaviour that deteriorate over time. Symptoms may include the following:

Can the Condition Be Treated?

The disease can develop slowly over the years and progress aggressively in the later stages. Medications can help manage mild to severe symptoms. Apart from this, care from support groups and modifications in lifestyle can go a long way in reducing the symptoms and improving the quality of life.

When to See a Doctor

In the initial stage of Alzheimer’s disease, people tend to undergo mood alterations. They may become easily annoyed, depressed or anxious. Many lose interest in hobbies and social gatherings. These changes can be challenging and hard to cope with for both the person, as well as the family. It is advisable to seek the help of a doctor and relevant support groups to monitor and handle the degenerative condition. While none of this will halt the progress of the disease, it can help you deal with the situation better.

Alzheimer’s is not a part of normal ageing. It is a neurodegenerative disorder that calls for medical attention. With early diagnosis, treatment and care group support, people with this condition can have improved quality of life.